I never got the requester's name, but here's my entry for Secret Santicore this year:


I request a new fantasy race, not system specific so pick whatever one you are most comfortable with or go system-less.


Thank you very much! 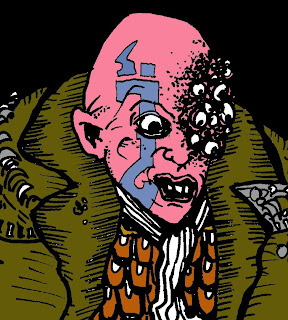 The sorcerer-kings of old, already worshiped as living gods by their subjects, and having grown bored with merely warping and molding nature to their whim, sought to fully assume the mantle of godhood and create life itself. With arcane secrets dredged up from the earth and sea and called down from the stars, they set to work, their forbidden knowledge wed to the toil of a thousand slaves, alchemists, and sages. At the expense of vast wealth, countless lives, and unquantifiable human suffering, they at last achieved their goal, as the first tottering form rose by its own strength from the vats, to stand complete before its maker.

Pleased with their new plaything, the sorcerer-kings whiled away their idle hours by creating variations and refinements enough to satisfy their immortality-strained appetites. Whole armies of vat-spawn were called up to re-enact legendary battles or duel to the death in elaborately planned and scripted combats. Harems of pleasure-slaves, their every feature sculpted in exacting detail, were bred in the vats to serve at their makers' grand debauches, only to be dissolved again when their masters had tired of their ministrations. So it went, century after extravagant, heedless century, until at last the power of the sorcerer-kings waned, and their empires were toppled amid fire and slaughter. The sorcerer-kings were put to the sword, their pale, anemic blood seeping into the blackened earth to mingle with the spilled ichor of their artificial slaves.

While most of their kind were ruthlessly exterminated, a tiny minority escaped destruction, having been posted to remote corners of the world, or waiting in stasis in their vats in some hidden laboratory. Their makers long since dead, and their original purpose unknown, these creatures, upon awakening and learning something of the world, often turn to adventuring to satisfy their endless curiosity and challenge their strange abilities.

Each vat-spawn is a hairless humanoid, with height and weight in the standard human range, though their features are often somewhat alien to modern observers, recalling ethnicities no longer found among the contemporary population, but glimpsed on the pitted faces of ancient coins, and in worn bas-reliefs on the columns and pediments of sunken temples.

If undisturbed, Vat-spawn are functionally immortal, though they are as susceptible to violent death as any other adventurer. As they are inherently unnatural, they cannot be Raised after death, nor can they reincarnate. Whether they possess souls at all is a matter of considerable theological debate.

They possesses functional genitalia, but are completely sterile.

After every 100 years, the vat-spawn's memory and personality will reset, returning it to 1st level.

Vat-spawn have a vibrantly-colored ichor (roll on color chart) in their veins instead of blood. This ichor has many alleged magical properties, and unscrupulous Magic-Users are always on the lookout for experimental subjects.

All Vat-spawn can graft on and incorporate body parts from humanoids and other creatures, as long as there is sufficient space. Any special abilities or attacks inherent to those parts (a medusa's eyes, etc.) transfer to their new owner. Removing one limb, eye, hand, etc. to make room for a new part inflicts 1d4 damage, after which it it is rendered useless, withering away to nothing. Characters attempting to graft on a new part must Save vs. Poison + the creatures hit dice – PC's level. The grafting process requires one hour * ½ the creature's hit dice of uninterrupted concentration. There are undoubtedly opportunities for abuse, here, but just use common sense or whatever the GM thinks would be funniest.