Hellenistic FrankenQuest: Arranging the Limbs on the Slab 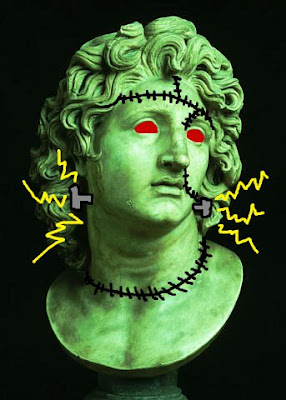 So I mentioned a a while ago that I'm working on a set of BRP rules for sword-and-sorcery adventure in the Hellenistic world. After comfortably ignoring it for months, I find myself drawn to the project again.

Originally, I had planned to simply use a pre-existing version of BRP and just combine it with Paul Elliott's Warlords of Alexander -- maybe with a few minor tweaks and house rules here and there. But the more I thought about it, and the sort of game I really wanted to run, I realized that the number of exceptions would be in danger of exceeding the rules-as-written.  Why not simply cobble together a purpose built version of BRP that did exactly what I wanted it to?  And why stop there?  Why not graft on bits I liked from other Percentile systems?

Now BRP's great -- gritty, fliexible-- and I especially like how characters improve organically based on what they've actually been doing as opposed to simply "leveling up."  But the Combat system still bugged me.  RQ 2nd ed. was too complex and fiddly for my tastes, and yet Stormbringer 1st was a little more abstract than I wanted.  I kept picking at it though, trying to decide which parts to keep and which to jettison -- fine-tuning it so it had just enough detail to be really satisfying without having to deal with things like Strike Ranks.  I needed something fast, lethal, intuitive, and with enough detail to really reward fighting smart and gaining a tactical advantage on your opponent.  As an added bonus, there should be a hilariously gory critical hit chart.

But  Richard Halliwell, Rick Priestley, Graeme Davis, Jim Bambra, and Phil Gallagher already did that in 1986.  And the gang at the late, lamented Black Industries, together with Davis and Priestly, polished it to a mirror sheen in 2005.* 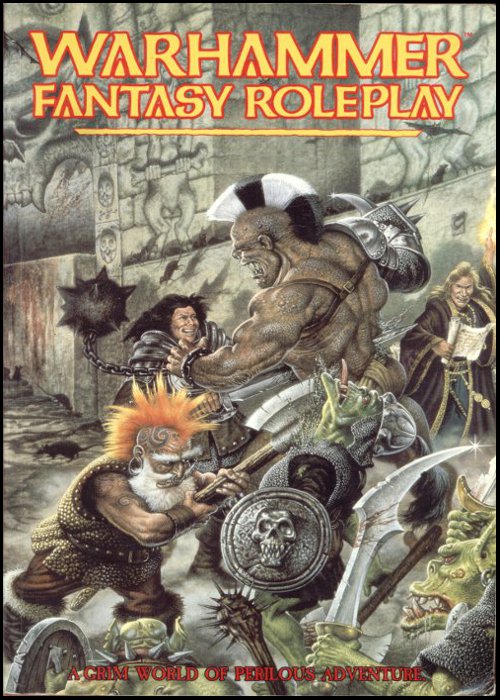 So here's my first stab at reconciling the two, and I think it's going to work.  D&D, of all things, proved to be the glue.  Note that I haven't made any provisions for Magic yet, and have yet to add options for Homelands and Class Backgrounds.  The former I'm still figuring out how to implement at all, and the latter will be comprised of modified versions of some of the options in  Stormbringer 1st ed. and Warlords of Alexander.

Hit Points (HP) How much physical damage a character can take before dying.  HP= the average of CON + SIZ (rounded up).  Once a character is brought below 0 HP, The Critical Hit Chart is consulted.**

Damage Modifier.  You add this to damage rolled on a successful hit.  To find your Damage Bonus, take the Average of your STR+ SIZ (rounded down) and apply the number to the following chart.  This number is added to (or subtracted from) your d10 roll when rolling damage (along with any other modifiers).


I think this will make a pretty good substitute for WFRP's SB + d10 = damage, while still allowing SIZ to play a part, as in BRP.


* Before any purists take me to task on this, I think the 1st ed. rulebook is more flavorful and complete, and it's my preferred take on the setting, but I can't help but prefer how 2nd ed. cleaned up the mechanics.

**That would be the expanded Critical Hit Chart Booklet included with the WFRP 1st ed. GM Screen. Have you SEEN this thing? Pages and pages of horrible injuries, divided by body part and again by they type of damage -- Blunt, Slashing, Piercing, Firearms...
Posted by Jeremy Duncan at 7/07/2012 12:06:00 AM 5 comments: