That's It-- I'm Writing My Own Tékumel Thingie. 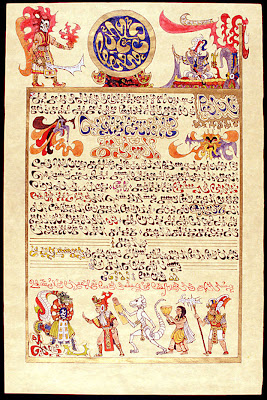 M.A.R. Barker's world of Tékumel has been all over the OSR blogosphere lately, mostly thanks to this announcement from the Tekumel Foundation. James Maliszewski's recently posted some retrospectives on Barker's novel Flamesong, the default starting campaign in Empire of the Petal Throne, and the maddening fingerprint-scape of The Nightmare Maze of Jigrésh. Chris at Hill Cantons has stepped up to the plate and plans to run Empire of the Petal Throne on Google+, which thrills me to no end. Of all the games I've read and daydreamed about, EPT is the one I never expected to actually play.

I've had the vague intention for a while now of writing up a conversion of Tékumel for Lamentations of the Flame Princess, but I've become increasingly impatient with vague intentions. Up until about a month or so ago, I hadn't written anything substantial since High School. Now I'm blogging semi-regularly, producing content that I'm actually happy with, and has been generally well-received. I've gone over the guidelines for free fan projects for both LotFP and Tekumel, and there's really nothing stopping me.

Fuck it, I'm going to DO THIS. First off, I should establish some limits and guidelines:

1) First and foremost, I want this to be an accessible, user-friendly tool for anyone to sit down with some friends who've never heard of Barker, Tékumel, Tsolyanu, etc., and run a game that's fun, fast-paced and exciting, while still maintaining the vibrant, trippy exoticism of the setting. This is broad-strokes, swashbuckling, sword-and-planet Tékumel. It's the difference between the Arabian Nights and the Sinbad movies, and a scholarly examination of the Abassid Caliphate, or between The Three Musketeers and a sober history of French society under Louis XIV. I'm going for a literary feel rather than an anthropological one. While I enjoy the Guardians of Order edition, I feel that it still places too much emphasis on cultural and historical minutiae to be really accessible to a new audience. To that end...

2) ... as in EPT, the assumption is that PCs are barbarian adventurers -- fresh off the boat and on the make, taking odd jobs no proper Tsolyani would touch with a 10-ft. pole in their quest for gold, glory, and citizenship. Players more experienced with the setting could have the option to play disgraced, now clanless Tsolyani who must rebuild their new lives from scratch, and win such glory for themselves that they can once more boast clan membership. At any rate, these characters are on the fringes of society looking in, not well-established citizens of that society.

3) I want it to be short, sharp, sweet, and flavorful, with a premium placed on utility and ease of use. I'm taking my cue from Zak S.'s Vornheim, here. I see this as being 20-30 pages, tops. To that end, there will be a great many mix- and- match elements, random tables, and story hooks, but very little in the way of exhaustive canonical detail. This will be a setting-specific toolkit, not a complete game or a definitive sourcebook.

4) It will be free. I expect to stray from canon at some point, and at this stage, I'd rather not have to wrangle with the logistics and red tape needed to put out an official commercial product. I'd be open to the possibility later, which would involve getting approval from the Tekumel Foundation. On the system side of things, from what I can see, Raggi's LotFP Compatibly License Terms seem easy enough to abide by, but I'd rather leave that off the table for right now.

5) Art and Layout: While I'm starting to get back to drawing and painting, my work isn't nearly of professional quality and I have no experience with proper document layout programs or techniques. I'd like this to be aesthetically pleasing, though, which means I have to either (a) Learn to do everything myself, or (b) enlist the help of others who'd be willing to contribute pro bono (I'm embarrassingly broke at the moment).

And that's all I have at the moment. I'm expecting this to take a while, and I'll be working on other projects throughout, but this is something I'd really like to see through to completion.
Posted by Jeremy Duncan at 8/03/2011 01:47:00 PM 9 comments: