So I put out a request to my players over G+ for questions about setting, playstyle, etc. for my campaign.  As with Jeff's 20 Questions, I think this is a useful and more interesting method of defining a setting, and it forces me to supply details I'd normally be inclined to gloss over, and also to determine what should be left vague.

I'll be doing this in two parts (unless I get another post's-worth of questions).  First up is Michael Moscrip: 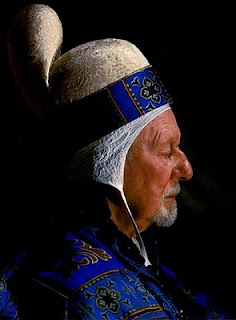 How is the local ruler chosen, and what sort of government is it?

Galbaruc is an independent city-state and a republic (though this hasn't always been the case).  The closest historical/cultural analogue is probably the Republic of Venice.  The Princeps (First Citizen) is elected by the Council of Ten, who are in turn drawn from the ranks of the Senate.  There is still a traditional aristocracy, but its power and influence has weakened considerably with the resurgence of the merchant class. 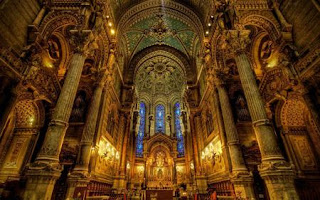 When and where are religious services held? What's it like to attend?


Most religious services are held in churches and temples.  Urizenite churches are typically massive and architecturally dazzling, or strive to be.  Shrines and temples to more obscure deities can be as tiny as a niche in an alleyway, or a back room in a private home or business.  Street preachers of varying persuasions will rant and cajole from impromptu booths and platforms set up around the city, though these are appreciated by most spectators as entertainment.  Mystery cults, etc. usually meet in some underground or secluded outdoor areas.  The structure of these services will differ greatly according to religion or sect, but it has been noted that religious practices in the city tend to take on a more baroque and sensational character than elsewhere, with a greater emphasis on decoration, showy vestments, eccentricity, and theatrical flourish.

Note -- at some point, I might rename they days of the week, but until then, let's assume our own 7-day week with Sunday as a holy day/day of rest for Urizenites, just to keep it simple and familiar. 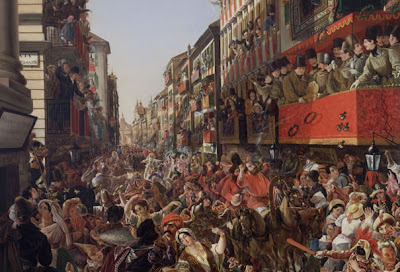 Are there frequent holidays or festivals? What is it like to be there?


Holidays and festivals are frequent - -both the native celebrations of the city and those brought by immigrants from all corners of the earth (and beyond).  Sometimes, two or more of these may be in full swing at the same time, the streets and canals thronged with celebrants.  Galbaruc's festivals are noted for their insistent observance of rituals and forms forgotten, banned, or unobserved elsewhere, as well as a tendency for ostentation and novelty.  Typically, you can count on a relaxation or reversal of social conventions, lots of booze, sex, drugs, music, and dancing, and swarms of pickpockets and other petty thieves. Two notable festivals are the Courtship of Seppophis and the Festival of the Great Culling. 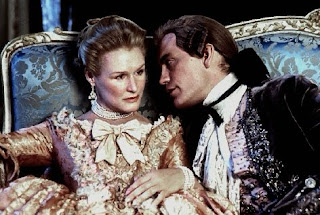 
Often, the same behavior will make one celebrated in some quarters and despised in others.  A sense of style and dash can do much to turn a common thief or murderer into a bold, picturesque rogue, subject to the embellishments of popular imagination and the guest of honor at the homes of those wishing to arouse envy and controversy in others of their set.

Acts and attitudes generally applauded:
- defeating enemies of the Republic as well as local dangers and nuisances.
- hosting a public event, funding parks, monuments, fountains, pleasure-gardens, etc.
- donating to charities and philanthropic pursuits
- performing some other act of civic pride
- Acting in a bold, striking, and decisive manner.
- Displays of Courage, Wit, and Cunning.
- Achieving Revenge on one's enemies, or perishing spectacularly in the attempt.
- Rising to the height of one's chosen pursuit or profession  -- the Beggar-King of Galbaruc is still a beggar,   but commands a grudging respect for his position within his milieu.
- Acting according to one's own philosophical, ethical, or aesthetic convictions, with a lofty contempt for death and other consequences of same.

Acts and attitudes generally disdained:
- Treason or collaboration with enemies of the Republic
- Pettiness and miserliness.
- Displays of cowardice and indecisiveness.
- A lack of style and grace -- Coarseness of sensibility.
- Failure to take action due to despair or complacency
- Engaging in slave-trading
- abuse of the elderly, the pious, the innocent, and the beautiful. (according to public opinion)
- Failure to keep one's promises.
- Acting contrary to one's established character and reputation.

All of the above are subject to exceptions, excuses, unforeseen variables, and the fickle whims of the public. 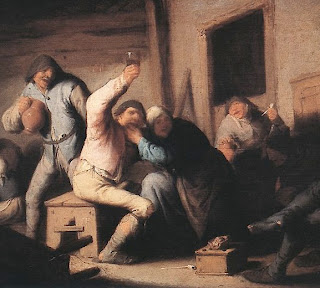 What's the most common job for a common person? 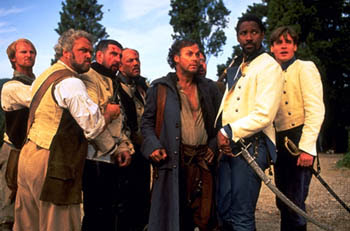 Who shows up if there's a fire? A murder? A riot?


Fire:  In poorer neighborhoods, it's usually up to an impromptu bucket brigade, perhaps led by a member of that contrada's watch, or some other upstanding citizen.  There is no single permanent paid firefighting force in the city, but several ruthlessly competitive rival organizations have sprung up.  They will often brawl with one another over territory and haggle with property owners, refusing to take any action until arriving at a disproportionately favorable settlement.  In truly dire circumstances, the city militia will be called into action.

Murder:  Each contrada is responsible for arming and organizing a local watch to patrol itself, which can take the form of anything from an ad hoc brute squad with cudgels and torches to a well-trained, uniformly equipped force in distinctive uniform.  In theory, serious malefactors captured by these forces are to be transferred to the custody of the city's nascent police force, but all too often, such things are dealt with internally, with rough justice administered on the spot, in the privacy of a local barracks or a shopkeeper's basement.  Suspects apprehended for murder, rape, etc., often find themselves dragged in front of their supposed victims' families/kinsmen/business partners, who may then determine their fate.

Riot: If it isn't stopped at the Watch level (or if the watchmen join the mob themselves) the City Militia is called out.  The cavalry is particularly brutal in their methods.  Their efforts may be enhanced by those of sorcerers and alchemists in the employ of the City. 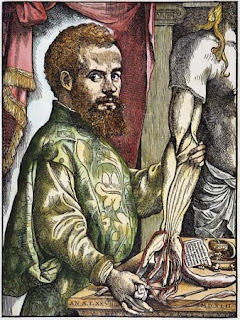 If I'm an upstanding citizen, who do I tell if I find a body? Who does that person answer to?

In a good neighborhood (where a body has a chance of lying intact and unmolested for any length of time, and Watch/Police patrols more frequent and robust) an upstanding citizen should inform a man or officer of the local watch, or an officer of the police, if one happens to be in the vicinity.  The police are widely considered to be ineffectual, unsympathetic, and dangerously new, and most established citizens of good character prefer to work directly with the local watch, who more often than not know the citizen, at least by reputation, and can vouch for his character.  Foreigners and those of lesser social standing may prefer to deal with the police, who are held to be more impartial in such matters (for good or ill).