EPT: Thursday Night on the Island 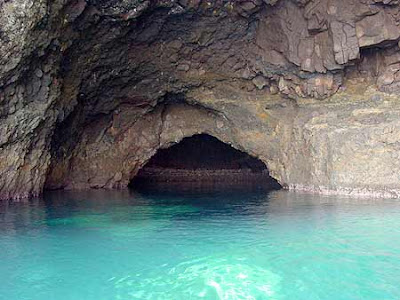 The Foreign Quarter of Jakalla has been abuzz lately with talk of the latest expedition to the Manse of Kotaru hiChakresa.

- Two stout warriors, Dagazar (Evan Elkins) and Orin "the Witless" (Jason Kielbasa) and a priest, Orin "The Wise" made their way to the mysterious island.

- They encountered two small boats already on shore, and, after some deliberation, decided not to ascend the steep, rock-hewn staircase, but to circumnavigate the island,looking for another point of entry. At the southern tip of the island, they found the mouth of a sea-cave.

- Upon entering, they found themselves in a small chamber that proved to be part of a larger complex. They also seem to have found some treasure, to judge from their satisfied expressions upon returning.

- Shortly after they began exploring the complex, they found themselves assaulted by a number (which seems to vary with each telling) of human foes. Dagazar has been proudly wearing the mummified, shrunken heads of two of these adversaries (a male and a female) from his belt.