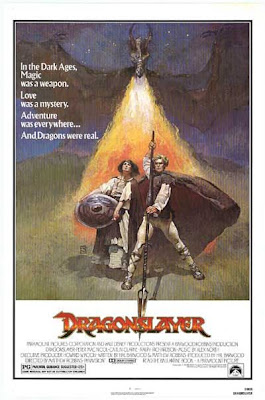 1. Holy shit, that was a great dragon.

2. The amount of Latin in this movie is a delight.

3. People in this movie are actually dressed in convincing Early Medieval clothing, rather than ridiculous confections of buckles and straps.

4. If they made this movie today, it would be full of crappy CGI, the leads would all be impossibly good-looking, and it would be 3 hours long. Also, there would be a bumbling comic sidekick, and fart jokes.

5. Hey, that priest is Emperor Palpatine!

6. The dragon has some depth (its rage at the murder of its hatchlings) without getting all Dragonheart - Sensitive New Age Guy about it.

7. Have I mentioned all the Latin? This might just be a former Classics major thing, but I'm grinning like an idiot, here.

8. The villain/main henchman guy was a total bastard, but in a way I could really respect.

9. I can't believe I've never seen this one before, and it really sucks that this was a commercial flop.