So I've been giving some thought to the actual setting for this thing.  The idea is to start out on a central hex on one planet, and then expand from there as the players see fit.  This limits the scope of the campaign at the beginning, but I find that narrowing down your options at the very start allows for a much easier "buy-in" from players.  This way, their options and opportunities for adventure can expand in response to the players' actions and interests.  Also, I don't have a huge amount of time for prep, and I'm chronically indecisive.  This takes a lot of the burden off of my hands by presenting me with fewer decisions to make over a longer stretch of time.

Anyway, here's what I've come up with so far: 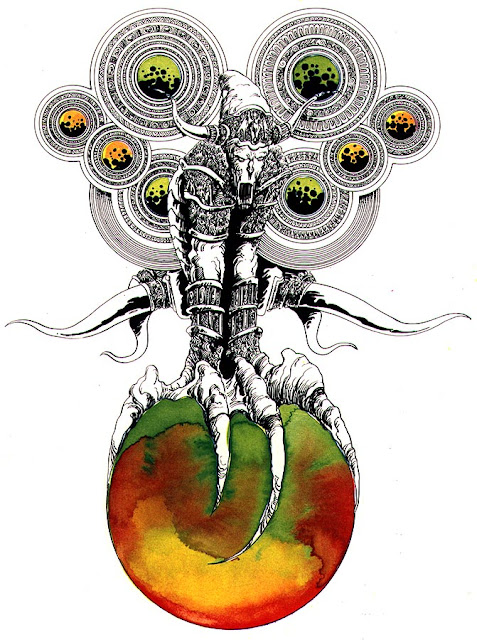 The Planet Oriax, at various points in its history, has been:

- A poisonous, chaotic hellscape - the screaming, malformed, botched abortion of a degenerate star.  This rather overheated description can be found in the otherwise sober planetary historian Yivok the Lesser's Lives of the Planets.  He maintained throughout his life a particularly violent and irrational dislike for the planet.  He would never mention its name directly, referring to it as either "that spherical blasphemy" or, more cryptically, "the bloodshot eye of the anti-Father."  When near death, he reportedly asked to be carried out to an orbital observation deck where Oriax could be observed by long-range telescope.  Peering through the screen, he excitedly made an obscene gesture in the direction of the planet before expiring, a smile on his withered lips.

- The plaything of a generally irresponsible pantheon of Kirbyesque alien space gods, some of whose descendants exist today.

-  The capitol world of at least two galaxy-spanning empires

- A penal colony -- a dumping ground for all manner of criminals, heretics, and madmen.

- A pilgrimage site, famous for its monumental reliquaries, within whose gem-encrusted frames were housed the calcified bones of martyred titan-saints, standing in eternal vigil.

At present, it's a blasted, post-apocalyptic wasteland..  There are still forests, seas, jungles, and glaciers, but much of the planet's surface has been given over to desert.  The planet's littered with ruined cities and monuments, and the bones of massive extinct beasts bleaching under the harsh sun.  Warp-storms crackle across the landscape with alarming frequency, tearing open temporary holes in the fabric of space-time, and leaving madness and mutation in their wake.  The great, continent-spanning civilizations of the past have fragmented into small, isolated communities, whose eccentricities have only become more pronounced in isolation.  The immortal descendants of ancient Sorcerer-kings spend their days in drug-induced reverie and petty intrigue.  Some of these forsake their immortality and leave the safety of their hermetically-sealed crystalline palaces to seek adventure and death in the lands beyond.  Rival warlords jockey for position.  A few would-be conquerors have attempted to form empires, but so far, the largest political entities are independent towns and loosely-allied city-states.  The lands between are filled with strange and terrifying creatures, treacherous geography, fanatical cults, bands of predatory mutants, and the laboratory strongholds of mad wizards.

Oriax today is far from the center of interplanetary politics and trade, and its relative obscurity, dangerous reputation, and lack of many modern amenities make it an unpopular destination for casual tourists, though a few thrill-seekers arrive each solar year.  The bulk of off-worlders are adventurers of some description, lured by tales of vast, half-buried wealth, or with ambitions to carve out their own petty kingdoms in a savage world, far from the confines and strictures of life on the core planets.  Along with these trickle in a disparate collection of fugitives, refugees, exiles, explorers, spies, heretics, archaeologists, missionaries, and the sort of dangerous eccentrics who can find no employment in civilized space.