My Empire of the Petal Throne Game: the setup. 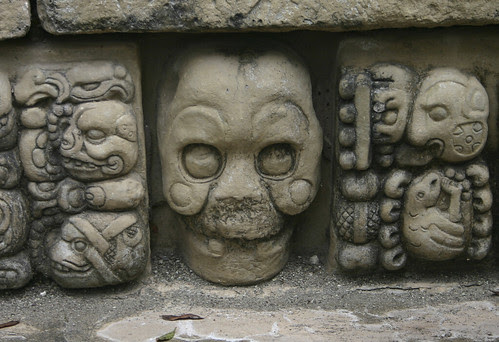 I probably should've mentioned this before, but I've been running Empire of the Petal Throne on Google Plus. I've been running it in conjunction with Chris Kutalik over at Hill Cantons, and we've hashed out a set of FLAILSNAILS-style conventions: The Jakalla Protocols as well as some houserules. Both games are set, as the name suggests, in and around the Tsolyani port-city of Jakalla, the "City Half as Old as the World" -- a teeming, decadent southern metropolis, where the PCs, bas fresh-off the-boat barbarians, attempt to earn gold, glory, and citizenship. To this end, we've staked out different locations -- Chris' games have focused on a section of the Jakalla Underworld - the labyrinth of tunnels, ruins, and passageways that lies beneath the city, while I've set up shop on a little island off the coast, where a member of a prominent clan has an ancestral manor house. We're both kick-starting our games again, after a brief hiatus, and I thought I'd share something about mine.

Here's what you know:

- The house currently belongs to Kotaru hiChakresa of the Golden Sunburst Clan.

- He hasn't been seen in over a decade, during which a meshqu plaque outside the gate has declared that he is indisposed and must not be disturbed.

- His clan suspects he may be dead, but, due to the strictures of Tsolyani etiquette, they cannot directly violate his publicly-stated wishes. Meanwhile, the house and the surrounding grounds have fallen into disrepair.

- His grand-niece, Mara hiChakresa, offers 300 kaitar per person to the party that can either provide irrefutable proof of his death, or convince him to sign a contract relinquishing the property back into the ownership of the clan as a whole. In addition, the Deputy Sub-Minister for the Housing of Foreign and Indigent Persons owes her a favor, and would be able to furnish the necessary paperwork to secure better housing for the party (most of whom are languishing in the Tower of the Red Dome, a notorious, vermin-infested flophouse.

- Kotaru hiChakresa is/was quite wealthy and had/has a reputation as something of a sorcerer.

- One adventurer has died trying to scale the wall. When he reached to top, he was incinerated by numerous beams of light.

- Undead caretakers have been found roaming the grounds outside the wall, and in the lighthouse. All encountered so far have been destroyed.

- There are hostile creatures of some sort inhabiting the nearby caves. It had been proposed that the caves might contain a secret passage to the manor house, though this theory has yet to be tested, as the party was attacked by arrow-firing assailants shortly upon venturing inside.
Posted by Jeremy Duncan at 12/01/2011 12:52:00 AM