Gygaxian Naturalists: Your Campaign's Monster Manual According to the Players 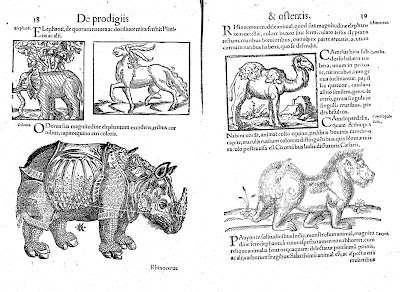 This may have been proposed before, but just in case it hasn't...

So I was thinking about Galbaruc, and monsters, and how I wanted to handle monsters in my campaign setting, and what I wanted to emphasize, and avoid, and I got to thinking about a session of Jeff Rient's Caves of Myrddin campaign I was in a few weeks ago. We were somewhere beneath the East Tower, having just descended to a new level, and we encountered a grayish, winged creature we took to be a gargoyle. This prompted a brief discussion on whether or not our characters would know what it was, let alone its strengths and weaknesses, etc. And then Jeff said we were free to use any out-of-character knowledge we wanted. In fact, we were welcome to open the book right there on the spot, and look up the relevant entry.*

This came as something of a shock to me. For most of my (admittedly short, by community standards) gaming career, this simply WAS NOT DONE. "Metagaming" was high on the hierarchy of sins. This was madness. This was the Pope handing out condoms at a Pride rally.

So we looked up the entry, decided we had very little chance of taking on such an opponent, and ran like hell. But I didn't trust the entry anyway. The whole thing made me paranoid. No, there was a reason Jeff was so blase about the whole thing. This wasn't a gargoyle at all. Or maybe it was, but it had some kind of crazy anti-gargoyle powers and shot napalm out of its nipples or something.

I loved that feeling of uncertainty-- of having information right in front of you, but not quite being able to trust it. For all I know, Jeff might simply be running with absolute transparency, and I was getting all worked up for nothing. 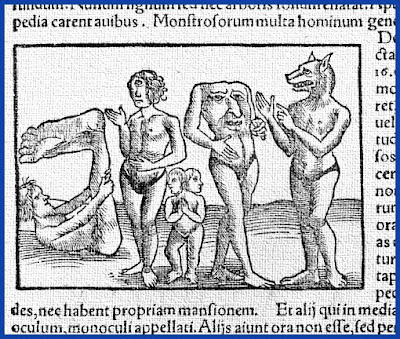 But this made me think about Herodotus' History, medieval bestiaries and the accounts of early travelers and explorers. We've got information, sometimes very specific information, but it's not exactly reliable. Often, this information is second-hand at best, and you have writers and illustrators, often with the best will in the world, working from garbled accounts. And all this is further confused by a thick fog of lies, exaggerations, wishful thinking, and pious tempts to imbue these creatures with religious symbolism. I have a T.H. White translation of a medieval bestiary that describes the panther as a symbol for Christ, attests to the miraculous ability of the beaver to detach its own genitals (and thus become a symbol of chastity) and depicts the crocodile as some kind of wolf-creature with eagle talons. 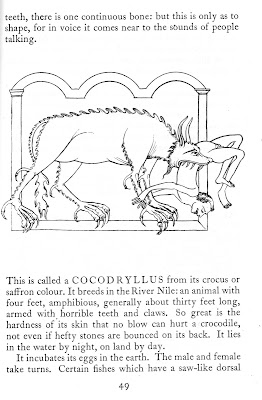 This would be perfect for gaming, and even better for ConstantCon games, where you have a nice big pool of players and their characters hopping from game-world to game world. There's already a sizable amount of rumor and speculation flying around about the Caves of Myrddin, for example.
The PCs are explorers -- they venture into bizarre, uncharted territories and CHART THEM. Dungeons are explored, passages marked, traps, secret doors, and mysterious items cataloged and referenced for later use. Secrets are bought, sold and traded. Bounties are offered by other players for the heads of particular miscreants.

There's really no reason monsters can't work the same way. The party encounters some strange critter or swarm of critters they've never seen before. Half the party is wiped out, but the survivors take notes. "Large, single red eye and a black beak, wings, covered in dense, foul-smelling white fur. Can breathe paralyzing fog at least once a round. We needed at least a 16 to hit, so AC is 3 or lower. The one we killed was still alive after we did 18 damage to it, but then the cleric (God rest his poor soul) got it for 8 points in a single hit and killed it, so we know it had somewhere between 19 and 26 Hit Points. They seem to travel in packs of 3-5."

Later, these creatures acquire a name, maybe a sketch from someone whose character encountered one, or, even better, someone reading that person's account of the encounter. Rumors about possible weaknesses are raised. What if it's some kind of demon. Would Holy Water affect it? Only one way to find out... G+ chat sessions become Explorer's Clubs. "Didn't you try smearing your faces with gnoll bone marrow, old boy? No?"

*Now that I think about it, this may have just been so we'd stand around dawdling and he'd have an excuse to roll for Wandering Monsters
Posted by Jeremy Duncan at 12/05/2011 01:00:00 AM