Four Dignitaries of Hell of Special Interest to the Criminal Element


This can be considered an addition to the "Hell" entry in The Scofflaw's ABC. 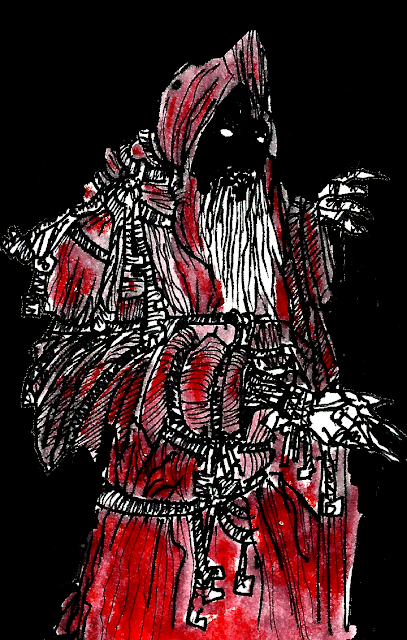 1. Dulak-Mhir, Castellan of the Fortress of Joy. Appears as an aged man in a tattered scarlet robe, his body wound head to foot with iron rings, from which depend a clanking, jangling assortment of keys. He may be called upon to unlock any doorway, gate, or strongbox which stands between a mortal and their desire. He will perform this service in exchange for the petitioner agreeing to bear one of his key-rings. Dulak-Mihr will choose the ring himself, which may be small enough to wear around the pinky finger, or large enough to circle a man’s waist. Whatever the size, the ring will be heavy, uncomfortably tight (but not so much as to cut off circulation) and impossible to remove. It is not known what will transpire when Dulak-Mhir has cast off his last ring and may once more stand unburdened of his duties.

2. Kalkiskordivaay, Marchioness of the Wormwood Star. Appears as a leopard with the head of a woman of no mean appearance, her red-gold hair oddly cast in the light of a crown of pale green fire. When she speaks, it is as the tinkling of small chimes in the roar of a hurricane. Kalkiskordivaay delights in the corruption of stalwart hearts and the betrayal of duty. She will teach the lines and curves of her sigil to favored malefactors in dreams of unnerving beauty. These votaries will then seek out the individual they seek to bend from their purpose and attempt to persuade them to some inconsequential betrayal of a charge or duty. If they can be swayed but one iota, their doom is secured. The corruptor then inscribes the name of their victim in the center of their Patroness’ sigil. With each successive week after the the inscription, the victim becomes ever more susceptible to suggestion, and at a month’s end, they are firmly in their new master's thrall, unable and undesirous to disobey any direct order.  This binding may only be broken if the sigil is somehow defaced or destroyed, in which event, Kalkiskordivaay withdraws her favor in disgust.  She has been known to respond favorably to the sacrifice of a loyal guard dog, or a puppy whelped from same.

3. Ulshh, Master of Revels at the Court of the Inverted Citadel.  Vain, restless, and fond of novelty, Ulshh never appears to mortals more than once in the same form.  His last fleshly incarnation was as a grotesquely fat lavender-skinned man wearing the powdered and rouged skin of a slender fop, with the gaps in this unusual suit filled in with puffs of vermillion taffeta and laced with golden thread.  Ulshh is often appealed to by poets, actors, and musicians whose talents are on the wane, or have yet to acquire sufficent fame and fortune by more laborious means.  For the enterprising criminal, he has been known to provide the following service:  When presented with the tibia of a boy whose voice has not yet broken, Ulshh will fashion it into a flute, engraved with verses in an unknown tongue.  When the flute is played, all who can hear its music (save the player) are forced to dance a stately measure, and may do nothing else until the music ceases.  For every minute the flute is played, the player ages 1d10 years.  Should the player reach the age of 100 by this means, they must successfully save vs. Death every subsequent minute the flute is played.  Should the player die in the midst of playing, the flute splits open, shattering into useless fragments of bone.

4. Glalabursik, Carnifex-General of the Legion Inevitable.  Appears as a pale, hairless androgyne clad in antique armor encrusted with rust, with shrivelled, sightless eyes and a cavernous mouth containing rows of tiny serrated teeth.  The murderer's friend, Glalabursik will grant the following boon to faithful petitioners:  He will produce, from some dark recesses of his armor, no less than 100,000 writhing maggots, which will scatter to devour any and all corpses within a 100 ft. radius of the petitioner.  Every hair, drop of blood, piece of bone, or scrap of flesh will be entirely consumed, leaving nothing but clothing and personal effects, picked clean of any trace of their owners.  This will take approximately one minute per corpse.  When they have finished, the sated maggots will wriggle their way back into their master's armor, and Glalabursik will take his leave with a slight bow.  Those present for this gruesome spectacle will notice no change in their own outward appearance, though anyone who was on intimate terms with those so devoured will perceive them as dripping with gore from head to foot.
Posted by Jeremy Duncan at 1/16/2013 08:33:00 AM