When GW Was Quirky and Interesting and More Interested In Making Cool Shit Than Issuing Cease- And- Desist Orders OR: The Games Workshop Staff, Circa 1987

Looking at the incredible pics Jeff put up recently from the 1983 Citadel Compendium put me on mind of one of my favorite pieces from the original (1987) version of Rogue Trader.  It's a group caricature portrait of the GW staff at the time, done up in the early gonzo form of what would become the 40k aesthetic. 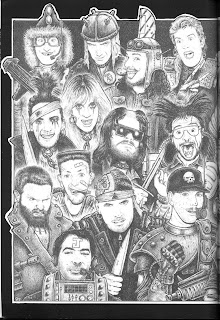 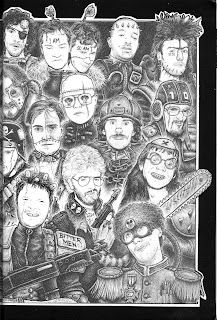 To me, it's emblematic of GW's shift from the quirky, individual, and interesting to the dull, impersonal, and monolithic.  I think this comes across in every aspect of the company's output.  The artwork becomes more consistent and technically refined, but loses the odd, personal, sometimes wildly divergent work of artists like John Blanche, Ian Miller, John Sibbick (remember the punked-out dwarf hacking through the goblin on the over of WFRP 1st ed?), and Martin McKenna, who did the group portrait above and whose pencil work can be found throughout a lot of early WFRP stuff (he did all the interior illos for The Enemy Within: Death on the Reik, for instance) , resulting in a comparatively stagnant, predictable, uniform aesthetic that has more to do with maintaining "brand identity" than anything else.  White Dwarf's past awesomeness and sad metamorphosis into little more than a glossy advertising brochure is already well documented here and elsewhere.

I was going to go off on an extended diatribe on the loss of the individual voice/personal aesthetics/creative risk-taking in gaming products and publications, conformity and corporate culture, and a little pom-pom twirling on how, with the OSR and the the indie gaming scene, we're seeing a resurgence in the sort of distinctive personal blah blah blah.... but if you're reading this, you've probably already read several of those, with better writing, stronger arguments, and more exhaustive detail, so for now, I'm just going to say OH MY GOD LOOK AT THAT PICTURE OF MUTANT SPACE PUNK GAME DESIGNERS WITH RAYGUNS AND CHAINSAWS.
Posted by Jeremy Duncan at 2/19/2012 06:20:00 PM