Come Not in That Form! What the well-dressed demon is wearing this summoning. 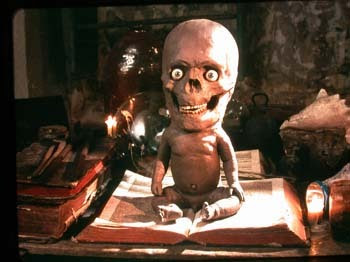 Being creatures of spirit, demons are not bound by any physical consistency, and may adopt such forms as boredom, perversity, or personal aesthetics dictate. Here are 20 "costume changes."

2. A laughing huntsman wearing a suit of stitched-together infants’ skin, complete with a jaunty cap.

3. A vaguely humanoid figure made of rusted and bloodstained metal implements.

4. A cloud of fat corpse-flies, buzzing as one.

5. A gnarled, stooped figure with pale green skin, branded all over with still-smoking magical sigils. Its long, tangled beard reaches to the floor. It has no visible eyes, tiny serrated teeth, and a tongue of blue flame.

6. A serpent with a flaming crown, its body folding back on itself like a Moebius strip.

7. A recently-executed criminal, with all the accompanying signs of his death.

8. A deceased close relative of one of the PCs, bleeding continually from the eyes.

10. A naked, faceless infant suspended in a floating sac of pale fluid.

11. A great hero/heroine from myth and legend, speaking in a voice of the opposite gender.

12. A pretty, effeminate young fop, clad in velvet and holding a peacock feather.

13. A constantly shifting riot of wings and eyes. Talks like Michael J. Anderson on Twin Peaks.

14. A wax replica of one of the PCs, slowly melting.

15. A huge, bloated maggot with the face of a beautiful young woman.

16. A kindly, care-worn cleric of the most popular local faith.

17. The last intelligent being killed by one of the PCs, as they appear now.

18. A flayed bear, walking upright and holding a fennel stalk and a flute made from a human thighbone.

19 An elongated figure made of black iron, topped with a star-shaped head orbited by tiny flames.

20. A composite creature with the head of an owl, the torso of an emaciated woman, and the lower body of a praying mantis. Carries a flail and a cup of sweet wine.